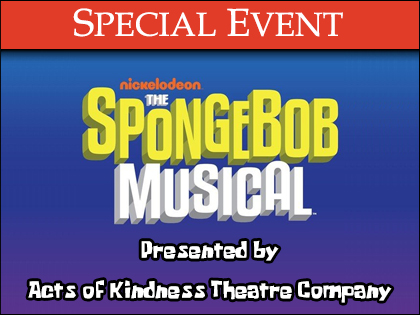 Tickets on sale May 1st. Presented by Acts of Kindness Theatre Company. Socially Distanced Reserved General Ticketing – Tickets will be assigned the best available seat in the order they are received.
The stakes are higher than ever in this dynamic stage musical, as SpongeBob and all of Bikini Bottom face the total annihilation of their undersea world. Chaos erupts. Lives hang in the balance. And just when all hope seems lost, a most unexpected hero rises up and takes center stage. The power of optimism really can save the world!
The Broadway production of The SpongeBob Musical earned its place on 2017’s “Best of Broadway”… named Best Musical by the Drama Desk Awards and Outer Critics Circle and earned 12 Tony Award nominations – the most nominated musical of the 2017-2018 theatre season.